LITTLETON (Reuters) – Pollution levels from China’s mammoth power sector are set to climb to new highs in 2023 as Beijing’s efforts to spur growth across the economy result in increased burning of fossil fuels.

The energy sector accounts for roughly 90% of emissions in the country, the world’s top polluter, according to the International Energy Agency (IEA).

Those emissions were somewhat curtailed in 2022 by repeated COVID-19 lockdowns and stringent curbs that restricted population movement and industrial output for much of the year in the top global manufacturer and exporter.

Even so, total emissions of carbon dioxide and equivalent gases from China’s power producers increased by 1.6% through November from the same period in 2021, hitting a record 4.27 billion tonnes, according to data from Ember.

Those pollution totals look set to crank even higher in 2023 as efforts to restore economic momentum trigger coordinated climbs in manufacturing and heavy industry throughout the country.

What’s more, due to the prevailing high cost of liquefied natural gas (LNG), power producers are expected to rely overwhelmingly on high-emitting coal to generate the additional energy required by industry, even as China continues to roll out world-leading volumes of renewable energy supplies.

The 1.6% rise in China’s power sector emissions through November was the smallest increase during that period on record aside from 2020 when China first tackled COVID outbreaks, Ember data shows.

However, China’s energy use is now set for a sustained rise as factories and heavy industries such as metals producers, chemical plants, and ceramics makers ramp up output following Beijing’s easing of COVID restrictions.

And much of that incremental climb in energy demand is likely to be coal-intensive, as smokestack plants run off their own coal boilers while higher levels of power use by factories will require utilities to raise overall coal-fed baseload energy levels.

While it may take several months – or possibly years – for China’s economy to recover to pre-COVID output levels, several sub-sectors that produce inputs used by manufacturers and industry have already ratcheted production up to record or multi-year highs.

Crude oil refiners and producers of non-ferrous metals such as copper, aluminum, nickel, and zinc have lifted output to multi-year or record highs as of November.

In addition, producers of ethylene, polymers, resins, sulphuric acid, and soda ash – all used in the manufacturing of electronics, machinery, and other finished products – have also aggressively increased output since late 2022. 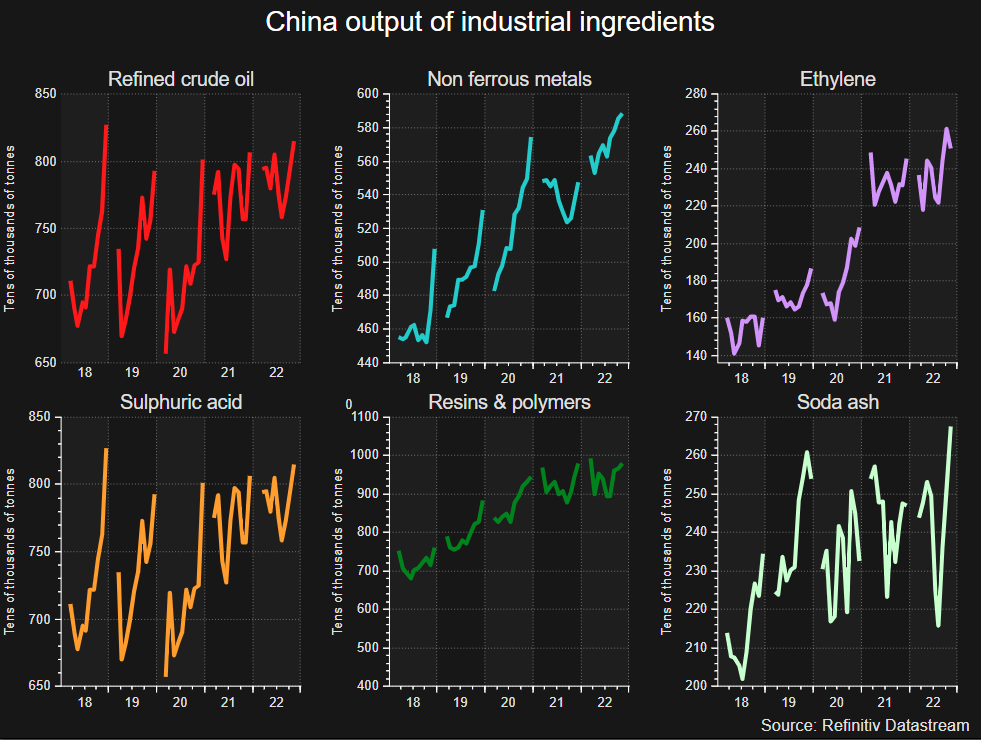 Many of these increases in supply may be tied to expectations of increased end-user demand, rather than by any actual improvements in order books.

And in the case of crude oil refining, the higher refined product output likely reflects targets for more fuel exports rather than real increases in domestic demand.

Even so, the higher levels of economic activity by such a wide swath of key industries will itself likely generate more consumption and spending along industrial supply chains.

And alongside the slew of stimulus measures already unveiled by Beijing to spur more spending and consumption in 2023, these increases in activity among secondary sectors point to a cumulative build in overall energy use in China over the coming year.

To be sure, there remain several key data points that show persistent weakness in China’s economy, including its world-leading air travel market which remains heavily depressed on both domestic and international routes.

But the trajectory of both energy use and emissions is clearly higher for many other parts of China’s economy. That bodes ill for global pollution volumes that scaled fresh highs in 2022 even as many of China’s heavy polluters were sidelined.

(The opinions expressed here are those of the author, a columnist for Reuters.)